If any of these projects resonate with you, drop me a line;

I’m looking to create a 10 page pitch package now, with a commitment from the artist to stay on and complete the series within the next year. 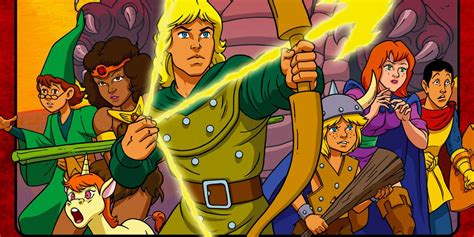 I’ve been wanting to do a fan-fiction reboot of this series for the longest time.

I finally got around to writing the script.

My vision of the reboot follows the kids all grown up back in the real world, where their kids disappear, forcing them to reunite and go back to D&D land to rescue their children.

While this is an unauthorized fan-fiction project, I’m really serious about doing it… and doing it right.

Here’s a preview of the first 5 pages of the script.

The story targets folks who grew up with the cartoon who are now older like me, so a more mature audience. No cartoony style here, but likely a more simplistic line art, standard commercialized art approach.
(I could also see this as a crazy Manga, even though that wasn’t my original vision.)

< UPDATE: Hit the title to check out the initial character designs. >

A while back I was listening to this music track on Youtube, while I was listening and working on something else, I kept seeing these images of a militant group of nuns fighting supernatural evil. Very vivid images in my mind.

This concept would be a manga; and would be a gratuitously sexy waifu/Eechi series.

Yeah, I know lots of militant nun stuff has already been done, but I’ve got my own take on it. Trust me.

Space Salvor comes from an unpublished side-scroller shooter. If 80’s hair band metal and classic Battlestar Gallatica/Buck Rogers space fights get you hot, check it out.

This series also has a bunch of colorful alien races which gives it an old-school, Flash Gordon kind of vibe. And yes, the lost civilization is humanity!

Logline:
A space salvor aids a lost civilization in reuniting its people and initiating its last remaining jump vessel before the tyrannical alien overseers destroy them in their entirety.

Open, but leaning more toward the standard commercial side.

#4) Beyond the Isle of Avalon. Excalibur Story.

If you click on over to the Fiction tab, you can read a chapter of this King Arthur prequel story I wrote a while back (“Excalibur”). This is a classic Game of Thrones/LOR style fantasy adventure.

About a year ago I came across Phillip Buckenham’s work in Valhalla Awaits (below). This style fits the Beyond Avalon perfectly and is exactly what I envisioned for this story.

I was super stoked to work with Phil, because he was into the story, but timing didn’t work out as he’s too focused on his own projects/previous commitments to pick up a new series. I was pretty devastated by the news 🙁

Beyond Avalon has a starting cast of, I think 69 dudes. That is, a bunch of British soldiers, a bunch of Roman soldiers, and a bunch of Burgundian barbarians all get shipwrecked together on the Isle. It’s got amazons, werewolves, a hydra and a few other fantasy things thrown in, but definitely, illustrating a lot of warriors and fighting is required. Robot kids was the sample manga story I came up with to illustrate the writing points in my book; “Storycraft for Comics.”

Logline:
A soldier ordered to put down an insurgent force winds up leading the very rebels he is sent to destroy against his own military, which secretly intends to convert the entire planet into mindless automatons.

MANGA. A studio Ghibli style would be great for this story as it takes place on a world with a lot of fantastical environments. However, it does also have a lot of mech/robot characters and action.

I do a lot of work in the indie gaming space. Violet Sun is another story I wrote for a game that was never published.

Logline:
A young, privileged, deep space explorer returns to the Earth’s solar system to find he holds the key to keeping humanity from extinction–a key that the last religious madmen of humanity and a dark, unknown alien force will stop at nothing to possess.

Open. Since it’s a dark sci-fi horror story, there’s a bit more room for a more artistic and less commercial… or as I like to label it, “artistic.”

If you’re not looking to throw down on some comic art, you can help bring one or more of these IPs to life, by sharing this page on your social media OR mentioning it directly to one of your cool comic artist friends!